A Girl and Her Gun 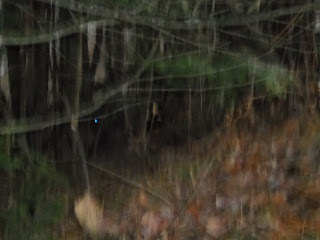 When the Commander took Sara out this morning I was surprised when he came back inside and told me about a black fox that was hanging out in the yard. He claimed that the fox was not afraid of him and just would not be chased away. You can see the foxes glowing evil eyes in the picture above. 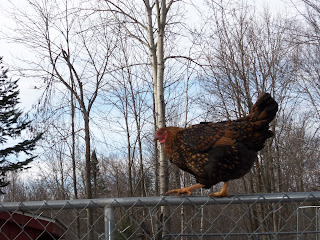 I know why the fox was here, he wanted to eat my poor chickens or guineas. I wondered if this was the fox that killed my guinea chicks earlier this Summer. When I took my daughter to school the fox was actually blocking the driveway and wouldn't move when I honked the horn....if my daughter wouldn't have been in the car I may have just run it down then and there. 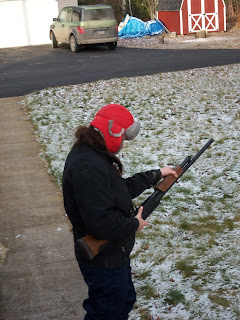 When I got home the fox was still there so I couldn't let the animals out, something had to give. I called the local Department of Natural Resources office and explained to them that a fox was in my yard and it wasn't showing any fear of humans, I was afraid it may have rabies. The DNR officer told me that if the animal was bothering me that I should shoot it. Does the DNR do anything to help folks out?

I tried to call the Commander by got his voice mail, drat. I called my dad and got his answering machine so I left him this message; "Oh Hell, I was hoping there was someone there who could walk me through how to shoot a gun." I could only imagine what thoughts went through his mind when he got that message.

Fortunately the Commander called back and he almost went into shock when I told him I wanted him to talk me through loading the shotgun. I located the gun and he described the various kinds of ammunition that I had to choose from. He suggested some target ammo to scare the fox off but I told him the fox had to go so I grabbed some slugs.

He described the safety, the sliding mechanism, and I figured out how to load....after a bit of trial and error and a few shells laying on the ground.  I was ready to go.  No way I was going to let a rabid fox kill any of my precious animals. 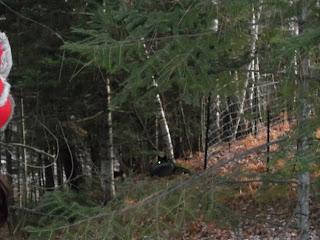 I went out to the woods and there he was, glowing evil eyes and all. I raised the gun to my shoulder, took aim, and wondered how much of a kick this gun had. A few breaths later I fired.......miss! I figured that the fox would run off after my near miss and the loud noise but he didn't, this fox was not acting normal at all. 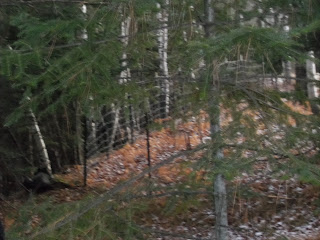 Mister fox moved off to the left a bit so after I reloaded he was going to be toast. I now had the feel of the weapon, I took steady aim, took a deep breath and fired.....miss! The fox just looked at me, at this point I was sure he had rabies. Nothing scared him. 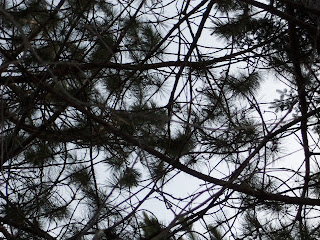 At this point I figured I needed to get a bit closer, but not too close. I carefully moved through the woods, cleared the field of fire (I didn't want to shoot a passing car, the house, or one of the barns), and reloaded. I had only brought two slugs and they were gone, I now had only two target shells. I figured that a hit from the pellets would drive him off so I took careful aim and fired once more....miss! Was he wearing a bullet proof vest? I reloaded and fired my last shell.....argh.....missssssss! 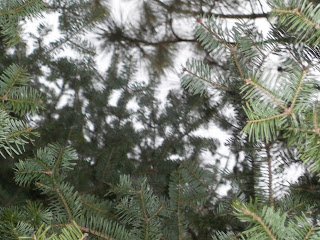 I hiked back to the house and called the Commander and asked if he had any suggestions. He directed me to the buckshot ammunition, he said that if I used this there was no way I could miss. So once again I hiked out through the woods, was again amazed that the fox hadn't run off, cleared the field of fire, and reloaded. 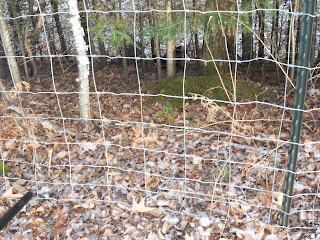 The fox was now in a tightly treed area, it would be a tough shot but I was confident. I took aim and fired.....miss! How did I miss using buckshot? The sights on this gun must be off. I had one shot left and now began to worry about possibly wounding the poor creature, I didn't have a hatchet like OFG so I worried that I may have to find a different way to finish him off.

I wiped my brow, reloaded, took a deep breath and fired....Mister fox was down! It took only six shots but I had succeeded. I didn't want to kill the fox but he couldn't just hang around here an kill my animals. The fact that he didn't run off when chased by the Commander, was chased by cars, and was shot at multiple times made it obvious that something was wrong with the poor thing, I think it was rabies.

I called the DNR and asked the officer if he wanted to come collect the animal for rabies testing, in case the county may be in the middle of an outbreak. He told me he wasn't interested but that I should bury the body deep, just in case. The fact that the ground is frozen was lost upon him.....

Below is a graphic picture of the foxes' post mortem. He was a beautiful black fox but it was just too dangerous to let him roam around here. 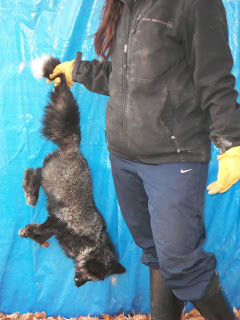 I'm not happy that I had to shoot the poor animal but I'm proud that I was able to get the job done. This was the first time I even fired a shotgun, so I figure that six shots wasn't too bad.
Posted by Chai Chai at 7:33 PM