Last night the Commander and I went out to check on the animals, he was worried that someone would be down with a case of bloat because when he put the animals away he saw a few too many hay bellies.

The moon was full and as we walked to the first barn a long wolf howl echoed in the distance.  It was soon answered by two other wolves who called from different locations, all surrounding our place.  It was a bit odd to hear a fourth call that was obviously a coyote, one would think they would keep their yaps shut with all the wolves about.

The wolf calls make sense from one perspective, for when our neighbor came over Sunday he alerted us that he had just seen a wolf dash through a field between our properties.  He said it was one of the largest wolves he has ever spotted around here.

I am now a bit scared to let the animals out into their pastures during the day while I'm away for work.  I can't leave the dogs out as they would just be snacks if a wolf came across them.  They just started wolf hunts in Minnesota this year, would it be bad if I hoped someone would thin the pack that seems to have moved in around here?
Posted by Chai Chai at 4:51 PM 10 comments:

Today started out normally with the Commander and I having breakfast down by the wood stove.  It quickly went downhill from there.

The Commander went upstairs and noticed that our builder was working out in the goat barn.  He was adding additional support to the loft, very nice of him.  With him out there working in the cold guilt quickly set in so both the Commander and I went outside to do a few chores and to chat.  I had no idea how cold it was out there.

The next thing I knew an audio alarm started to go off - a fire alarm from the house?  I rushed in and realized that the sound was coming from the OUTSIDE.  What the heck?  I walked around the side of the house and saw the alarm light on the septic mound and found the source of the alarm.  I went inside and called our neighbor (who runs a septic company) and through some miracle he was home and said he would be right over.  On Sunday morning!  He arrived and stated that we were lucky to get him as he is flying to Florida first thing Monday morning.  After a bit of trouble shooting he found that the pump was bad.  As luck would have it he had one at home!  Thirty minutes later he returned and everything up and running - whew.

So the goat loft was now reinforced, the septic pump was replaced, what next?  My hay guy called and wanted to deliver 100 bales.  My hay guy is the greatest.  He not only delivered but he was able to drive the hay wagon first to the goat barn then over to the sheep barn.  This allowed us to cut down on wheel barrow time and load the goat, buck and sheep barns directly from the truck!  The Commander only had to haul 26 bales to the Ram barn - much easier.  I spend most of my day stacking hay in four different lofts, I'm exhausted.

Just as we were finishing up the Commander noticed Dominick walking around inside his barn with the oatmeal tube stuck on his head.  He somehow worked the cap off the tube and jammed his head inside to eat the grain stored there, ugh.  That meant he needed to get some probiotics to prevent bloat.

As I was finishing up that chore the Commander called me over to the Rams.  Both Killarney and Hoss had large bloody gashes over their eyes.  After a bit more doctoring I was done for the day, I'm dead tired.

The Commander put everyone away tonight and he said everyone had noticeable hay bellies, that happens here on hay delivery days.  I'm sure the barns will all be full a poo tomorrow morning.
Posted by Chai Chai at 3:32 PM 5 comments: 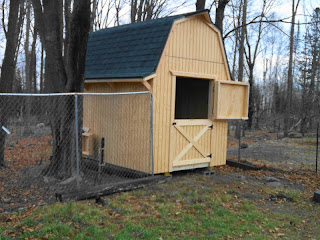 The Commander didn't take the job so it looks like we will be staying here for a long time.  I guess that means that the new Buck Barn won't go to waste.  I think it might be too cold to get it painted at this point but its arrival means I will be able to keep my own Bucks for breeding this year!
Posted by Chai Chai at 7:21 AM 9 comments: 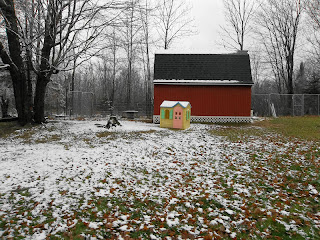 It snowed today, I can't believe it.  The Commander had the wood stove going full bore all day today.  The smell of baking bread and home made meatloaf filled the house as Jack Frost nipped at the windows.  For as bad as the weather was outside it sure was nice inside.

I haven't been posting lately as the Commander has been considering a new job that would take us home back to Michigan.  This is a huge decision for us but the timing is terrible.

First there is the election to consider and its impact on the future of the economy and the country.  We often refer to the homestead as our insurance policy, can we really afford to toss it away without knowing who the President is going to be?

Second, trying to sell a home in the Winter is next to impossible and the current economic climate doesn't make things any easier.  Can we afford to take a loss?  Again, knowing the results of the election would help.  What would I do with the animals?  (The goats go where I go!)

Third, could we get anything comparable in our new location?  If you have seen the pictures of my goat barn and the work my father did on the inside of it you can see my trepidation about finding something as nice as I have now.

Fourth, we built this place from scratch - are we ready to give it up? 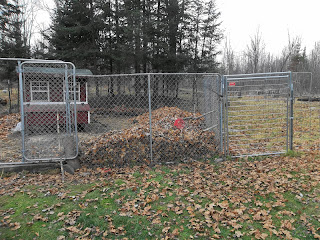 We took a lot of the leaves from the yard and deposited them inside the chicken coop. 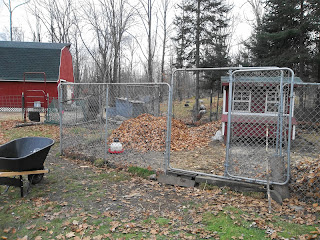 I have discovered over the last couple of years that the chickens shred the leaves to pieces in no time and the worms love it!
Posted by Chai Chai at 5:36 PM 6 comments: 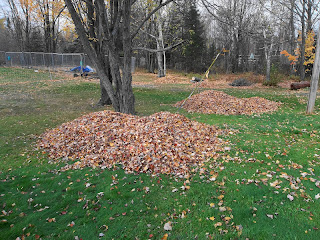 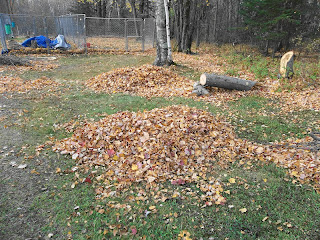 When the Commander and I can get a few moments together we plan on raking the leaves onto a tarp so they can be moved to the chicken coop.  Last year putting the leaves in with the chickens proved to be a huge success.  The chickens tore the leaves to shreds, no burning or disposal required.

I still hope to store a few bags of leaves in the garage for mid Winter treats.  The goats and sheep seem to enjoy eating them now and I bet they will find them a wonderful diversion from a steady diet of hay.
Posted by Chai Chai at 11:48 AM 1 comment: 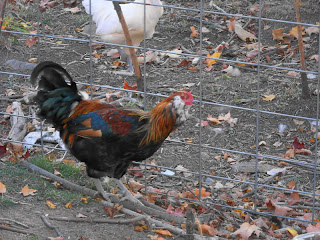 Blue Wheaton rooster, just like in the pictures.  Check! 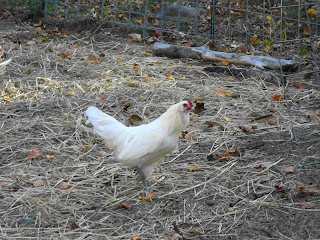 Blue Wheaton Hen, just like in the pictures?  Check?

Seems this "hen" spends a lot of her (its?) time crowing!  It looks like a hen, doesn't have rooster tail feathers, yet crows?  Have you ever seen anything like that before?
Posted by Chai Chai at 3:57 PM 7 comments: