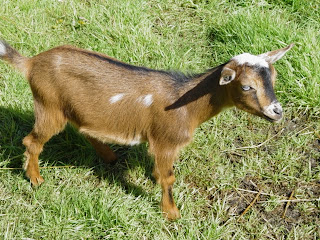 Addison is a female Nigerian Dwarf goat. When I saw a picture of Addison on a for sale listing she melted my heart. I called the owner and she told me that Addison was possibly pregnant (hopefully due in June) and was for sale since she was getting picked on by the other goats.

The Ohiofarmgirl had such good things to say about goats that I have decided to take the plunge. We hope to pick up Addison in mid to late March so we have time to set up a home for her and to find a wether to keep her company. If she is pregnant then I will have "kids" and a milk goat to keep me busy. 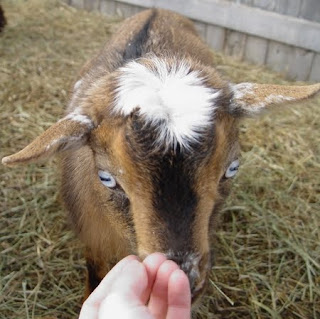 Addison will not be staying in the blue barn unless it gets fortified with wire fencing as a precaution against bears! I just love her blue eyes.
Posted by Chai Chai at 4:25 PM