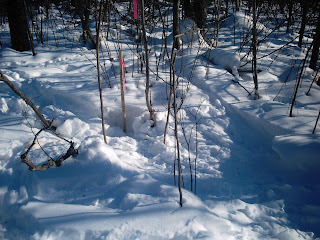 Farms need fences, and fences probably should be built on one's own property. Several walkabouts this fall/winter (we tried to stay out of the woods in the spring/summer due to ticks) gave us a fairly good idea of where the boundaries are, but one never knows.

The North boundary was easy, the road, to the West was a wood lined drainage ditch (both sides) separating us from the neighbor, the Eastern side was graced by a mostly fallen barbed wire fence, and the Southern end was anybodies guess (although we did pace it out).

The Commander was thinking that he would take out a GPS and just mark the corners, but little did he know that the legal description of the property read something like; the NE 1/4 of the SE 1/4 of P31, S4, .... - total gibberish.

Calls to local survey businesses revealed one thing, surveys are really expensive. After discussing how the neighbors would react if we threw up a fence on their land we decided to have a survey done.

Day 1 of the survey provided us with a stake one the edge of the yard, with the driveway and garage on the wrong side of the stake. Hmmm, why did the surveyor leave to go look up some court records? Could the driveway and garage be on the wrong side of the property line? A quick call revealed that the stake was a GPS mark - whew - they will be back to finish the next day. 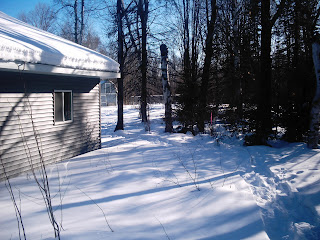 Day 2 dawns with the surveyor arriving equipped with snowshoes, a telescopic sight thing, and a GPS. The snowshoes proved to be key, more on that later. So as the surveyor moved lightly over the snow, he left a trail of pink ribbons and stakes - angling away from the drainage ditch cutting about 10 feet behind the garage, and merging with the corner of the garden. 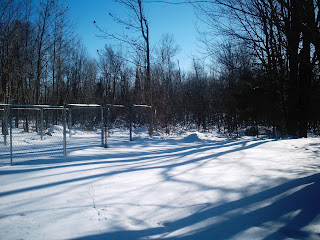 It seems that the drainage ditch was not the property line. The two dead trees that we had professionally removed last year because we were afraid that they could fall over the ditch and onto the neighbors house (or onto our garage) were on the neighbors property! It seems we have been raking and mowing part of the neighbors lawn that is oddly separated from their home by a ditch and woodland while it completely adjoins our own.

The Commander came home and noting the line of horrors behind the garage immediately wanted to venture out and check the rest of the markers. So off he goes with Sara in tow, to follow the trail of pink ribbons left by the surveyor. About 30 minutes later the Commander returns, completely out of breath and drenched in sweat. It seems that following the trail of the surveyor (who was on snowshoes) through 3+ feet of snow over broken wooded terrain was a bit more difficult than he anticipated.

Turns out the Northern and Eastern boundaries were about what were expected, while the pacing that we did to the South was accurate to within 10 yards. As for the Western side, well, we are going to have to think on that one for a bit.
Posted by Chai Chai at 6:12 PM