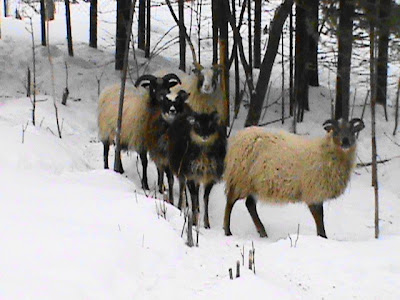 The time had come to break up our lone breading group and hopefully get things sorted out for lambing. Alder, the big white lug in the back, wasn't going to be parted from his girls easily. 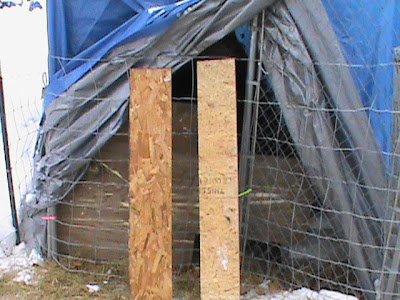 In preparation for the move Ironwood and Killarney were lured into the ramshackle shed with some grain and then they were closed inside. Since the gate couldn't close because it was blocked by about two feet of ice we had to run some extra fencing in front of their opening.

Alder was captured with the same grain trick, but we had a long way to go to get him in with the other rams. The Commander started out by carrying him while I held his horns, but the struggling only allowed us to make it one third of the way before he had to be put down. Next we "escorted" him by each taking a horn and led him down the ice trail. Unfortunately the trail was only wide enough for Alder, so the Commander and I had to trudge through the deep snow on either side. This was exhausting, so the last third of the trip had the Commander carrying Alder once again. 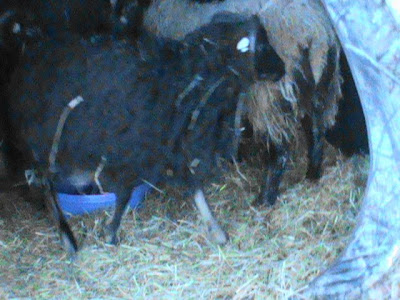 At this point Alder was introduced back into the ramshackle shed with his two compadres. The idea was that in the tight quarters no one would have room to really get a running start to hurt anyone else. It was like a wrestling match in there, headbutting, head swinging, snorting, and general wrestling around. Once they calmed down a bit we went inside to get some other chores done.

After about an hour I came outside to check on them and was shocked at what I saw. The air was foggy like after a hard rain, all three of them were panting heavily. Killarney had blood dripping off from his right horn and Alder had blood on his right side! I thought that Killarney had somehow stabbed poor Alder - we killed him! I quickly ran inside for my medical kit and got the Commander to come help me sort out this mess.

The Commander went in and drug them out one by one, starting with Killarney. It seems Killarney had cut his ear and that was where the dripping blood was coming from, whew. I put some peroxide on it and he ran off. Next was Ironwood and he had a small cut at the base of one of his horns, a little bloodstop fixed that right up. Finally Alder had his turn and a quick exam showed some blood on his wool but not a single cut or wound.

The three of them were now loose in the small pasture and decided to continue their battle, but with room to get up a full head of steam prior to ramming one another. We couldn't have that so the Commander grabbed a broom and started chasing them around their enclosure hoping to wear them out so they would be too tired to fight. I wish I had taken some pictures because the chase was hilarious; rams crashing through deep snow with the Commander waving a broom and slipping and sliding behind them. Sara wouldn't help and stood well clear of the action. 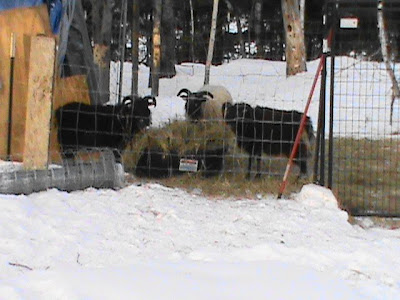 The Commander chased them for 20-30 minutes until everyone was exhausted, including him. During the chase the rams intermingled and occasionally butted one another, but finally decided the Commander was the greatest threat. After the Commander gave up the chase the boys sniffed around each other but were too tired to fight. After a while I went back out and got a picture of them all lounging by the feed bowl together, probably nursing their bumps and bruises.

I didn't notice any fighting today but next year we are going to have a better enclosure for them, one that will allow us to reintroduce them in a more sensible manner. Happy Valentines Day!
Posted by Chai Chai at 4:28 PM