What kind of a flock IS this? 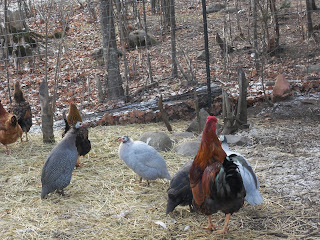 Leopold is the rooster in charge of the coop area and he has his hands full trying to keep order. Look at the picture above. In it you will see; a Rhode Island Red, Lavender male and female guineas, a Dark and Light Royal guinea, a few Golden Laced Red Wyandottes, and Leopold. A few of the guineas think they are chickens, one of the chickens thinks it is a guinea.....chaos, its pure chaos.

Little chicken squabbles break out on occasion and Leopold rushes in to break things up, but what is he supposed to do when several guineas are chasing chickens...except for the chicken that thinks its a guinea? Or how does he handle the chicken that the guineas think is their mama? Did I mention that all the guinea males follow Leopold around like he is their king? 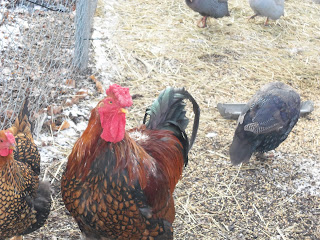 Last year Leopold suffered a bit of frost bite, by looking at him you can see why. As it gets colder Leopold spends more and more time inside the coop and at times you can hear the sounds of wrestling going on in there. I can only assume he is trying to keep or establish some kind of order, I'm not holding my breath.
Posted by Chai Chai at 5:54 PM