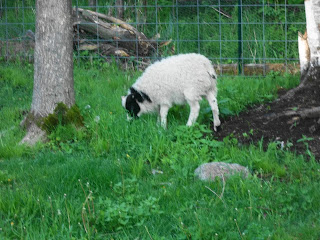 One of the feed stores in our area has reported that we have had almost 7 inches of rain in the last 5 days. The yard is a marsh but we still managed to get a lot of work done this weekend. We started by cleaning out the sheep barn. The waste hay was contaminated by birthing fluids and the urine of 5 lambs on liquid diets. So while we were cleaning out the stalls I moved the sheep over to the goat pen to have them "mow" the grass a bit. Berkley enjoyed the lush greenery. 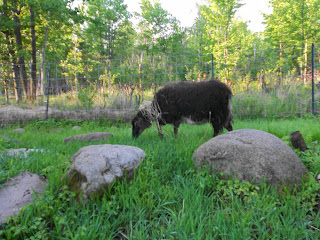 Azalia always seem to find a way to don a necklace, be it grass, hay, ferns. or whatever! (Click for a close up) 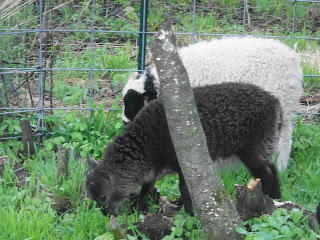 Bristol the Cascade ewe lamb is growing fast, she is almost as big as Berkley. 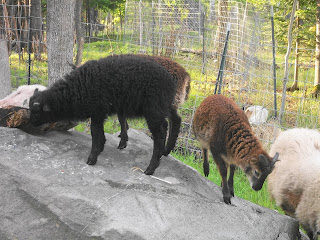 The lambs fill up on grass way faster than their mothers, leaving them lots of time to play on the rocks that the goats get to enjoy on a daily basis. 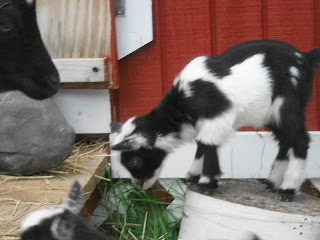 Once the sheep barn was cleaned out and they were returned to their pen it was time to clean out the goats barn. Mia found the birch stump to be as much fun to play on as the hay bench. 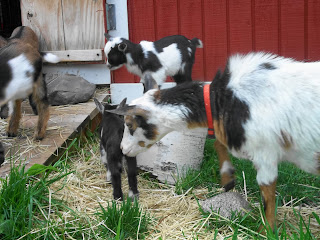 I don't know what it is but my goats just don't like eating grass. So they spent most of their time outside trying to figure out how to get back in! Of course the kids enjoy just being alive and were bouncing around everywhere. 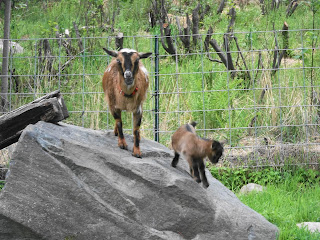 Addison was showing her buck Elijah how the sheep were playing on the rock in a totally incorrect manner. 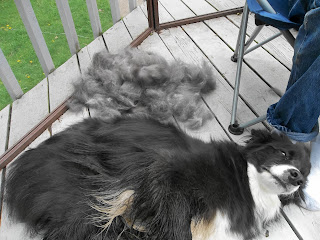 We did all this while dodging thunder showers, if this keeps up I'm going to have to start worrying about hoof rot. I didn't get any pictures but the fence around the garden has finally been restored, now I need to get the plants in. Add this to the two lambs born Saturday morning and getting the ram pasture open and I think this was one great weekend.  The last chore finished was one of the most important, we were able to remove most of Sara's shedding hair outside instead of her dropping it inside all over the carpet. This was completed between washing the mud off from her, for the fourth time this weekend. We need sunshine!
Posted by Chai Chai at 2:58 PM