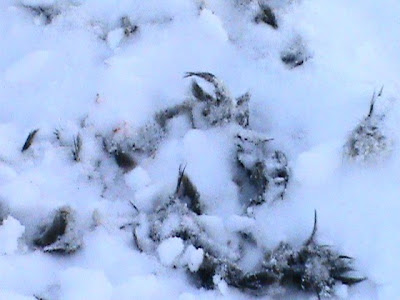 Sadness, that is the feeling around here today. Last night four guineas refused to sleep in the coop, preferring to remain outside, and that choice ultimately sealed their doom. This morning as the Commander was doing the normal feeding and watering he discovered their frozen headless bodies. It seems some predator took them one by one during the night, they just weren't smart enough to save themselves. We looked for tracks in the snow but couldn't find any, so we think it must have been an owl. Lost to us was the lone white guinea, two royals, and a lavender.

I am now worried that whatever dined here last night will return, I hope the remaining guineas all decide to spend their nights in the coop for a few days. 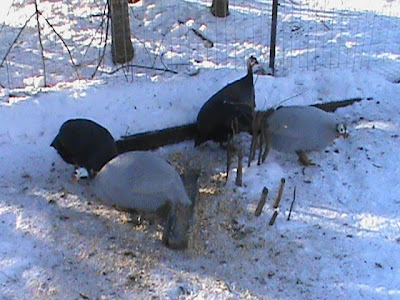 The remaining guineas haven't left the coop area today and were slow to leave the coop this morning. I am worried sick over their safety, and that of the chickens, but I can't make them get into the coop tonight.

They may be loud and they may chase the chickens but I love them, stay safe my guineas!
Posted by Chai Chai at 1:13 PM