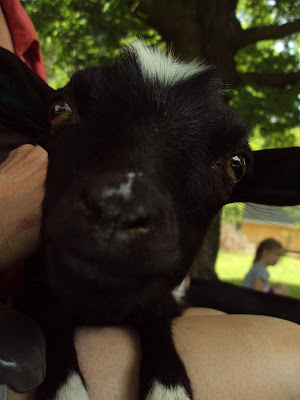 Little Gidget had lung congestion and a cough for about a week so I knew it was time for me to do something. I opened my medicine kit and broke out some LA 200 (an anti-biotic). LA 200 was designed originally for cattle and stings when injected. When I purchased the LA-200 from the feed store I didn't realize that they had a non-sting version. I can't remember the name of the non-sting version but it would have been worth while to purchase and would have saved me some heartache.

I gave Gidget a 1/2 cc shot for four consecutive evenings, twice under the left foreleg and twice under the right. The "sting" made Gidget cry out every time. Sara did not like that at all, in fact she did her best to jump up to get Gidget out of my arms in attempts to stop her from crying. Sara thinks Gidget is her baby and is very protective of her. Remember that when giving injections it is best to have a shot of epinephrine on hand in case the animal has a negative reaction, luckily in this case it was never needed.

After the shots I gave Gidget some Probiotics to keep up the good bacteria counts in her tummy that help in the digestive process. She is now no longer coughing and her lungs sound clear. Both Sara and I are happy that Gidget is back to her happy self, healthy appetite and all.
Posted by Chai Chai at 6:19 PM