How NOT to Burn a Brush Pile The brush pile on the edge of the woods has been with us a long time, and it has been growing bigger and bigger ever since the Commander wore out his chipper during the Chipper Wars. 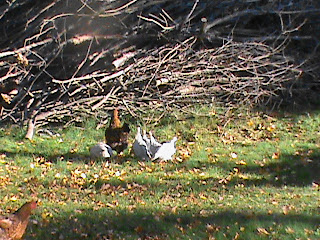 Over time the brush pile became part of the landscape, here you can see Mama Chicken leading her baby guinea's around it looking for treats. 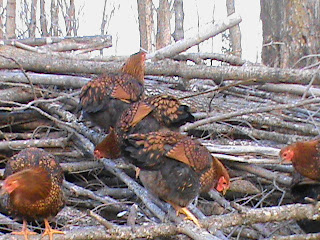 The chickens loved to hang out on the branches as it gave them a break from Leopold's aggressive advances..... 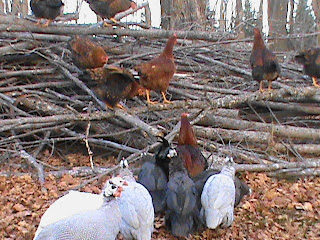 ....that is until the guineas decided to join them. The only chicken that liked to be around the guineas was Mama Chicken, but the guineas loved her like a mother... 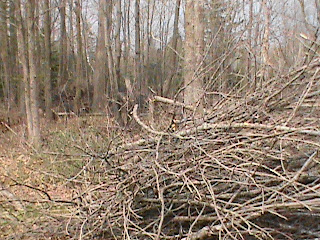 The wood pile grew and grew until the only way the Commander could think of to get rid of it was to set it aflame. The best time of year to accomplish this task without starting a forest fire was Winter, but I thought the pile had grown too big for even a Winter burn..... 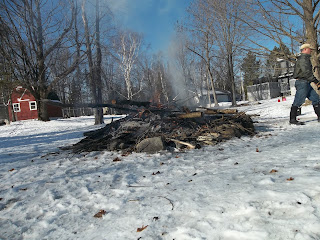 Last Saturday the Commander went outside and found that the wind was calm, this meant he wanted to burn some brush. He started with the brush and wet hay (from the goat barn) that was inside the rock lined fire pit designed for this exact purpose. 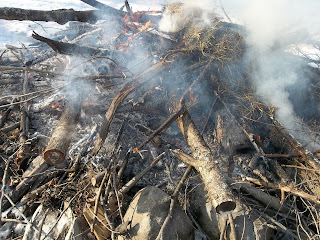 The wet waste hay burned slowly and was heavy on the smoke....it was at this point that I left to go to the store. 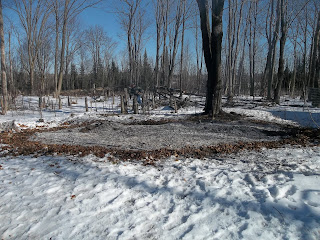 When I got home the brush pile was gone! I brought the groceries inside and immediately discovered that some thing was amiss. Several of the kitchen and bathroom rugs were outside hanging on the deck railing - they were soaking wet. 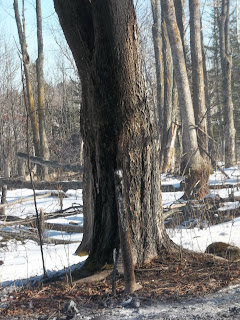 A closer inspection of the huge tree that was closest to the brush pile showed it had a scorched trunk and it was still steaming/smoking! 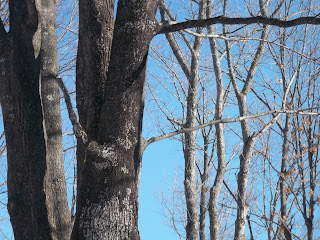 The trunk wasn't only burned at its base, the damage extended at least 15 feet up into the branches, and several branched appeared to have been burnt clean off the tree! 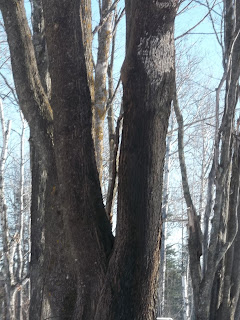 It seems that WHILE I WAS GONE the Commander decided to burn the brush pile. Things were going just fine until the wind picked up and began to blow directly at the tree on the edge of the forest. The increased wind velocity apparently fanned the flames and the Commander described them as being at least 8 feet wide and 15 feet high at their peak. He said that at one point the tree bark caught fire and he worried about a forest fire breaking out and spreading from the upper branches from tree to tree.

His convoluted story had him running to the sheep barn and using their bucket of drinking water to try and douse the first outbreak of flames on the tree. At some point the Commander had recruited the kids to form a bucket brigade from the bathroom tub and kitchen sink to try and hold off a forest fire (that explains the wet rugs). The Commander said it was touch and go for about 30 minutes as to whether he was going to call the fire department. Did I mention I wasn't home for this debacle?

By the time I got home the brush pile was gone yet the ground where it rested and the trunk of the tree were still smoking. I took a shovel and dug in to the ash pile and discovered that the roots in the ground were still burning! The Commander stayed outside for quite a while to make sure the smoldering embers didn't escape beyond their ashy grave, he used a shovel and a few more buckets of water to extinguish the hottest areas. I wonder if he was staying outside to avoid me telling him; "I told you so!"
Posted by Chai Chai at 7:07 PM