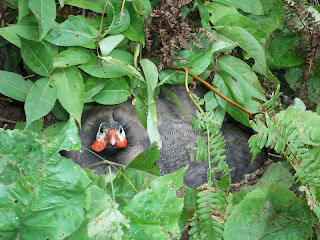 Juliette has somehow managed to survive a second year of trying to hatch out a clutch of eggs.  She failed on two attempts this year and was almost killed at least three times that I know of.  Her last nest was destroyed by who knows what and Molly got really sick from eating at least a few abandoned eggs.  I am very greatful that she has begun sleeping in the coop again at night. 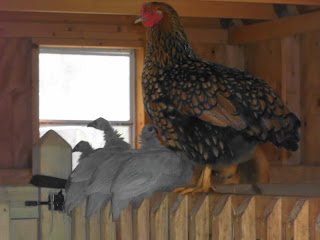 Momma chicken has done a great job of raising her five keets and two chickens.  I will need the keets this year because I only have three adult guineas left (eight killed by various predators this year). 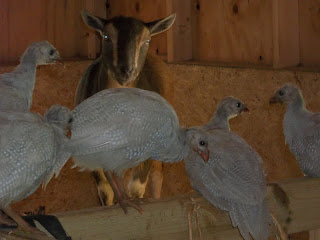 Momma takes her younglings everywhere, including the goat barn.  Can you spot the perching animal that doesn't belong? 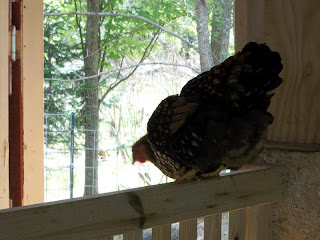 Momma like to use the goat barn as a doorway to get from the backyard area into the woods.  I think it is hilarious to see goats run screaming from their barn having been scared by little chicks. 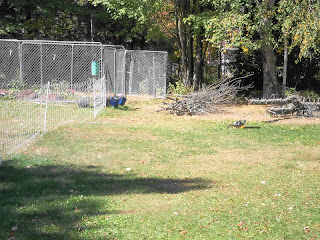 Momma's babies are getting too big for their mini-coop so we have been moving it slowly, a few feet every day, towards the main coop area. 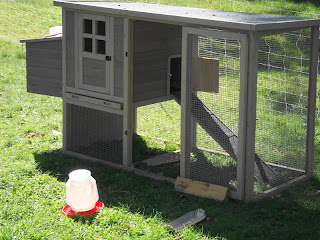 Here is a shot of the coop half way there!  The mini-coop is actually in the main coop area tonight.  After a few days I plan on closing up the mini-coop to see if momma will bring them into the main coop.  I hope so because the mini-coop won't make it this Winter.
Posted by Chai Chai at 5:51 PM