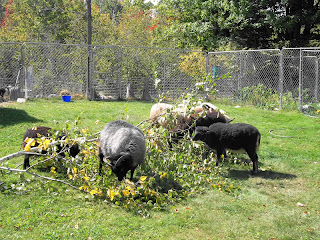 The Commander cut down a dead Pine tree and it tore a branch from a nearby Birch, that meant it was an unexpected snack time for the sheep and goats!  Just toss it in, call the girls, and let them have at it. 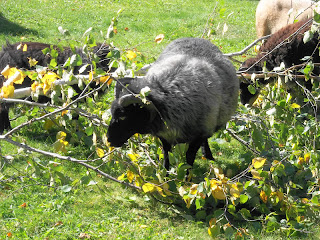 Between the goats and the sheep the branches were stripped bare in not time, no foliage goes to waste around her.

On an odd note the Commander was walking the fence line today and he found a portion of the the back fence that had been cut through and placed in such a way as to allow the sheep to escape without having to climb over the downed portion.  The cut fence was pulled away and set against a tree to allow free passage.  This was on the back fence line, behind it is more of our property so whoever did it didn't do it by accident.  Do we have to worry about rustlers?  I see no reason why a hunter would do this as the sheep have cleaned this area of the woods out so deer would have no reason to forage there.  Very strange and worrisome.
Posted by Chai Chai at 5:37 PM