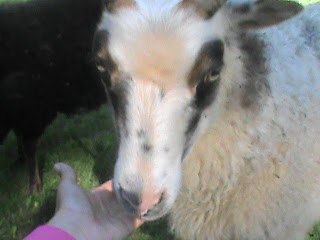 Yesterday afternoon we took Avalon to the Vet to see if she could figure out what was wrong with her. The exam didn't reveal anything obvious so she needed to draw some blood to send off for testing.

I didn't know that the preferred place to draw blood from a sheep was from the neck! Ava has very thick wool and it was playing havoc with the needle placement and after several tries the Vet broke out the scissors and cut away a nice clear patch. The blood was finally drawn but Ava was not happy, I was afraid she may go into shock.

That night Ava wouldn't go anywhere near the barn and I had to catch her with the shepherds crook. Once again Kia had to be lured inside with grain, she is next to impossible to trick but so far bribes have worked.

Ava got a 3rd dose of LA200 and was running a temperature of 102.6F - normal! I put her to bed with high hopes. Today she looked much better but still not totally her self. At 1730 the Vet called with the blood work results and they were ..... inconclusive :( ..... Her liver and kidney enzymes were slightly elevated but nothing that was completely unexplainable. The only takeaway was that we should discontinue the antibiotics, so I decided to leave her hassle free once she entered the barn.  The break from treatments might do her nerves some good. Of course Kia wouldn't go into the barn at all, not even the bribes would work. She had to be captured with the shepherds crooks, we may have to break out the tranquilizer guns tomorrow!

If she is better tomorrow I will have to credit the LA200 and banamine for saving her while she was running a 106F fever. It is good to know that she doesn't have anything contagious or some owner induced malady.

Thanks to everyone for their prayers and well wishes!
Posted by Chai Chai at 5:02 PM