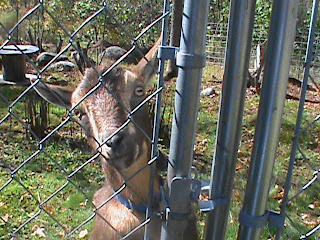 It was very nice outside yesterday and since it is getting close to breeding season I decided to break out the wormer and hoof trimming gear. Chip was excited because he loves to be held. The goats are easy to do because the just jump into your lap and eat up all the personal attention. 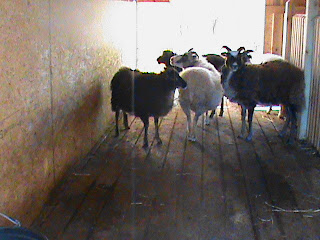 The girl sheep are a bit trickier to worm as they all panic and scatter at the very idea of being handled. We have to get them all into a stall and pull them out one by one, the biggest challenge is to avoid them hurting themselves in their panic.

Ava got an extra dose of a vitamin B oral drench to help keep her energy up, she is looking a lot better today. I'm not sure what got her sick but I'm still not sure she is totally out of the woods as of yet. 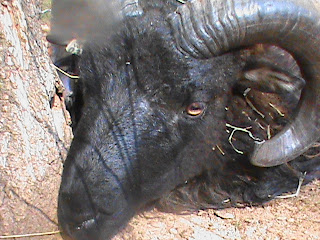 Taking care of the rams is always a bit tricky because of their strength and short tempers. The Commander went into the ram shed with a shepherds crook and pulled them out one by one for their treatments. Killarney was selected first to remove the leader of the pack from the others. He is always a bit protective of the others so the Commander thought he was less likely to get rammed once Killarney was finished.

Alder (Wildman) was next. Alder ALWAYS panics when handled and he didn't disappoint this time. Once the Commander got him hooked Alder went wild and the Commander ended up wrestling him for several moments before he got him under control. After a lot of huffing and puffing Alder was finished and set free.

That left Ironwood (who tried to jump out the window last time we tried this) and Albion. Ironwood was selected and wormed while he stood side by side with Albion. It took a bit of wrestling but no buildings were damaged in the process of worming Ironwood and then it was easy to finish Albion at the end of things.

The whole process needs to be completed again next week, hopefully the Commander will have recovered by then - I know the rams will be waiting for their rematch.
Posted by Chai Chai at 1:15 PM