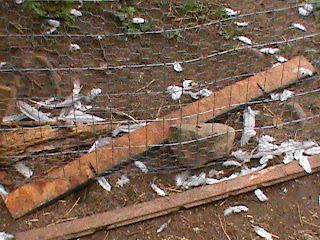 I went out to the coop the other morning and saw guinea feathers on the ground and in the pine tree. I thought for sure one of the guinea boys were "taken". 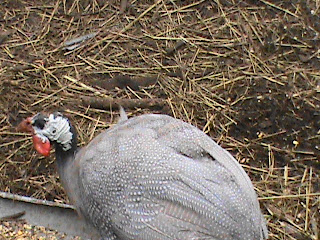 Turns out the Diablo somehow survived the attack. I think he fell out of the tree into the coop, and whatever was after him couldn't get in. Note the big bare spot in the middle of his back where there used to be feathers.  The bare spot is a lot bigger than it looks in this picture, you can see bare skin!

The two guinea boys spend more nights outside than they do in the coop. The are teaching the little guineas to stay out with them...much to momma chickens chagrin. I hope whatever it was that attacked them has moved on. I have to pray for them every night.
Posted by Chai Chai at 8:21 AM