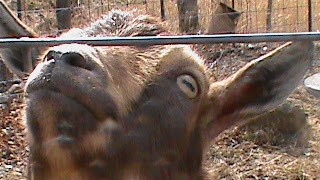 It was nice outside yesterday so I was sitting outside on a lawn chair taking in the sunshine and watching the chickens and guineas free range. I could hear the goats screaming to be let out in the background so I decided to get up and let them play in the yard.

As soon as I opened the door Chip took off like a flash. Sara was right by my side at the time but before I could bark out the command; "Sara, Get Chip!" he was half way to his destination - the Chicken Coop! 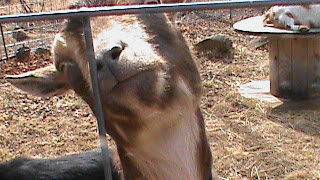 When the chickens are out free ranging the door to their coop area is left open so they can come and go, somehow Chip has learned this. To Chip an open coop means chicken feed.

Sara is fast, I mean really fast, but she won't go into the coop. By the time she caught up to Chip he was inside and eating as fast as he could. The Commander was in hot pursuit of both Chip and Sara but in those few seconds Chip managed to choke down a few mouth fulls of chicken grain....that gives him yucky poo....every time!
Posted by Chai Chai at 3:47 PM