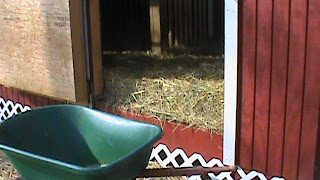 Yesterday Duluth set a record for the highest temperature ever on this day at 75 degrees! The Commander and I decided that the time had come to clean out the barns, the sheep barn was first up. Look how deep the waste hay is! 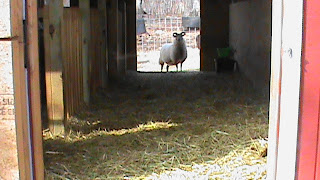 Gardenia was curious about what we were up to. 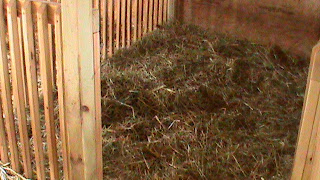 The middle stall was already cleaned out once this Winter so it shouldn't be too hard to clean. This stall is Lara's favorite so I'm hoping to get her in here to have her lambs. 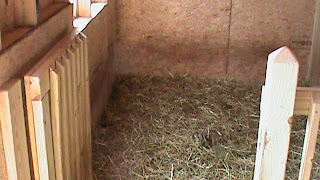 The end stall was also cleaned but it gets the most use so this one will take a bit more work to get ready. 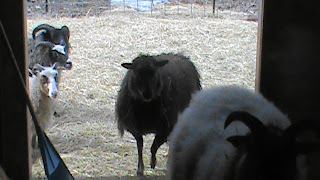 Once Gardenia and Azalea saw that we were in the stalls they came charging in to see if I was going to dish out any grain. 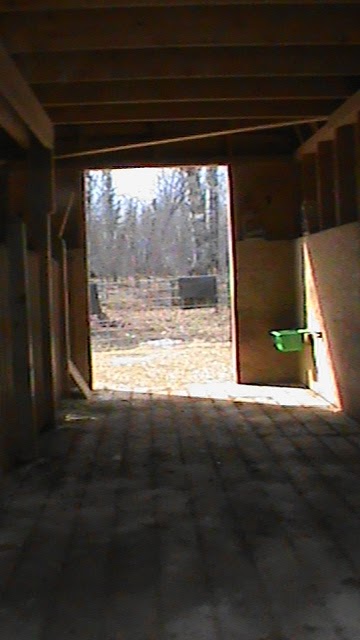 It took quite a while but we finally got everything cleaned out. The waste hay was relocated by wheel barrow into a marshy area that the Commander cleared out just before the start of Winter. I hope this will serve as my compost area, creating new dirt and filling in the marsh at the same time. 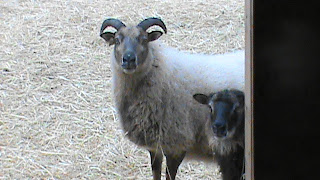 Once everything was cleaned out I put down some diatomaceous earth (DE) to prevent any bugs from settling in. Gardenia and Azalea were curious so I brought everyone in to have a bit of grain. 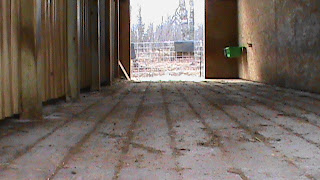 Unfortunately Lara and Zoe (the two new sheep) didn't like how the barn looked with all the waste hay removed so they were too afraid to go back in with the others. 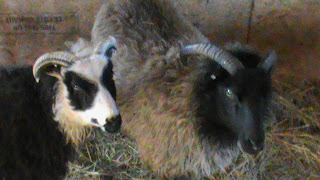 We tried to lure them in with grain, no luck. We moved the hay bowls into the barn and yet they still stayed outside.

When nightfall came we still couldn't get them to come back in, no amount of attempted herding, chasing, or bribing could get them inside. A few times the sheep would sneak up behind us and stare (laugh) at our pitiful efforts. The Commander finally gave up and closed the barn for the night, Zoe and Lara spent the night outside.

This morning the Commander opened up the barn and fed everyone inside in an attempt to use the girls hunger against them. Once he left they finally went inside to eat so I'll try to put them away tonight using a bit of grain.

Around here it is way to dangerous to overnight outside, especially this close to lambing. If I can't get them to overnight in the barn this is going to end in disaster.
Posted by Chai Chai at 12:32 PM