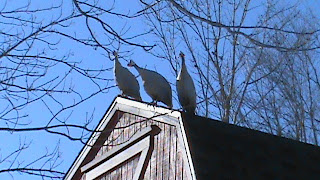 Guinea hens normally live in trees, but since ours have been raised with/as chickens they live in the chicken coop. The first Winter we had the guineas a few started to roost in the trees, unfortunately one night an owl feasted upon all the guineas that were outside the safety of the coop. I woke up to a bitter harvest of headless guinea bodies, not pretty. 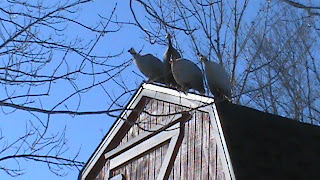 Last Summer a few of the guineas began to venture forth and spend time in the trees, a few even spent the night outside. I was happy that once Winter set in they decided to roost with the chickens as it was both safer and warmer.

With the onset of Spring in the air the guineas are once again setting out to explore the property. I have seen them in the trees and in the sheep barn. The other day I watched as a gaggle of eight guineas marched their way into the sheep barn and began to holler and screech. Their cries were amplified by the loft in the barn and the echos of their calls had the sheep totally spooked. 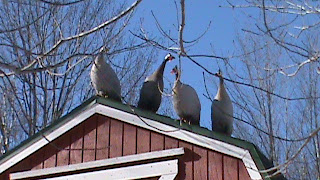 These pictures mark the first time that I have seen the guineas perched on top of the goat barn. I like that they are venturing forth as we will have a lot more cleared land for them to patrol this year. The guineas are great at devouring ticks, and in this role they are worth their weight in gold.
Posted by Chai Chai at 6:13 PM