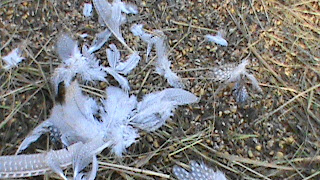 Last night 4 Guinea Hens decided to sleep in the pine trees instead of in the safety of the coop. This is not the first time this has happened around here. 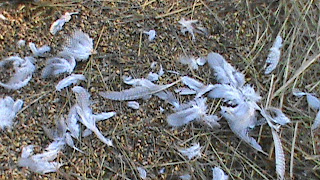 When the Commander went outside this morning at 0530 to water the sheep he found the remains of a headless guinea. 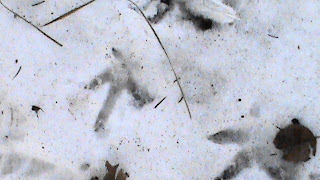 For the last week or so in the woods surrounding the house we have been hearing owls calling back and forth to one another, I think that is what got our unfortunate guinea. I found these huge footprints in the snow around the coop area this morning. They look like guinea tracks but these were much larger. 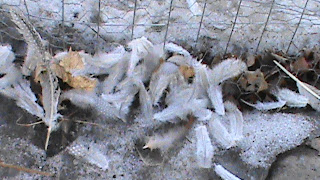 The poor guinea must have put up a pretty good fight as there were feathers everywhere. The Commander spotted one of the surviving guineas by the woodshed this morning while it was still dark but he couldn't catch it. Guineas are horribly night blind and are easy prey once discovered in the dark. The guinea by the woodshed was lucky as it must have flown to the security light by the garage to enable it to see for its escape.

While the Commander was out walking around he heard at least three owls calling each other so I took a flashlight out into the yard and made as much racket with the dogs as I could. I wasn't just concerned about the owls, I was also worried about prowling fox!

Sunday morning I spotted a huge black fox trotting behind the goat barn. I didn't have time to get my trusty 12 gauge but I'll be ready for him next time he is on the prowl around here. 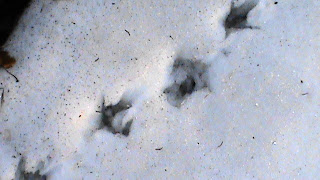 From the looks of the tracks I think more than I owl was tramping around on the ground last night. The other two guineas showed up at dawn and were desperate to get into the coop area. They must have flown blindly from their tree perches and hid in the underbrush. Whatever happened last night caused all Guineas to tuck themselves away safely in the coop tonight well before the chickens retired for the evening. Some lessons are learned the hard way.
Posted by Chai Chai at 6:12 PM