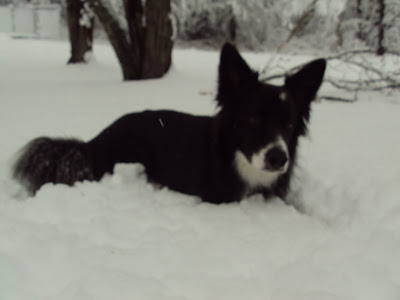 Last night Sara woke me up at 1230 and wanted to go outside, she always wants to go outside when there is snow. The problem was that no matter what I did she would not come back in! I tried calling her and bribing her with a dog bone but she would not leave the yard. I finally had to get dressed and go out in the 20 degree weather and drag her in. I was not happy with her, and I couldn't figure out why she was acting so strange. 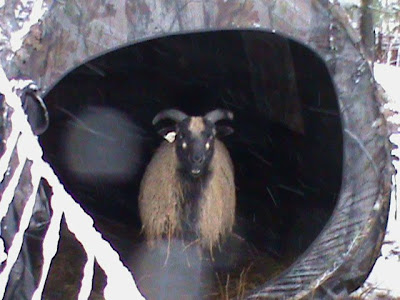 This morning I went outside to take the kids to school and discovered that the 2 rams were out of their enclosure and loose in the yard. Apparently the Commander didn't secure the latch to their area after feeding them last night and they escaped.

Seems that Sara tried to tell me last night but I didn't understand her. 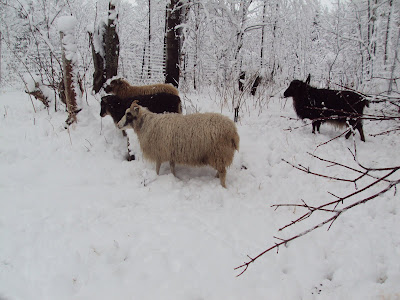 Thankfully the boys didn't wander into the road or off into the woods, they hung around trying to figure out how to get in with the girls. 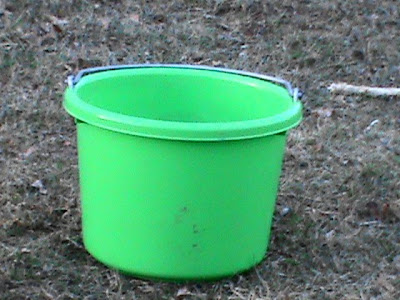 I needed to get them back into their pen, but how? I used the "magic" green grain bucket of course.

Just add a handful of grain to the bucket and then shake it, the noise is guaranteed to get goats, sheep, chickens, and even guinea's to follow like you were the Pied Piper of Hamelin.

The boys followed the bucket back to their pen and were safely put away. The Commander is going to get a lesson in "closing the gate" later.

Sara has been giving me the "I tried to tell you" look all day.
Posted by Chai Chai at 6:12 PM